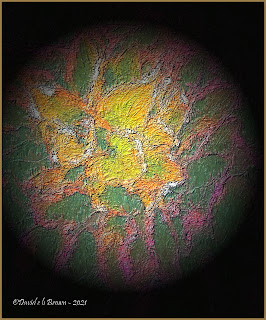 Today, I went to the back yard to see what I could find interesting to photograph. It turned out to be this Hosta plant, so I fired off a quick shot and came indoors. Tonight, after loading it into the computer, and messing with it big time, this flaming volcanic Hosta planet emerged, from where I have not quite figured out yet......OMG! I'm losing it....LOL!!! Cheers!
Posted by David c.h. Brown at 01:54 No comments: 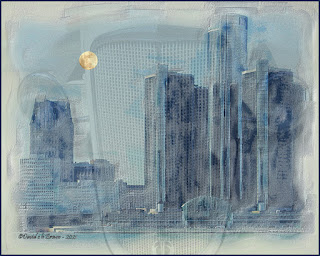 This image started out as just another mundane shot of the Detroit skyline on a clear blue sky day. Starting in a couple of weeks from now, I will be able to sit on my front veranda and listen to the roar of the Formula 1 race cars as they compete just across the river from where we live. Then on any given evening, there are the fireworks, for what I haven't a clue. Not just Detroit, but Windsor too. Folks sure love their fireworks here. So tonight, I got digging around in my old files, and came across this image of "Motown" and decided it might be fun to try at least to capture my impressions of the City in one image.....how can you tell that I am fighting boredom? Anyway, I decided that since it is the Motor City, and on any Summer weekend evening, just find a park bench and you can listen to the "Blues" throbbing on the air, as well as the squealing of rubber on pavement, accompanied by a very loud muffler system, as the boys do up the town. So, this is the resulting image, and it is totally spontaneous. I have no idea what I will end up with when I start out, so it is what it is, and yup, sometimes I even sort of like the outcome.....Cheers! 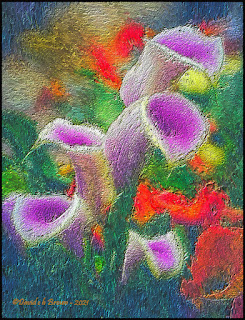 This little image started out as one of my rejects from a bunch that I did a couple of years ago. The colours and composition did not impress me much, but today, I thought I would apply some rather heavy handed treatment to it, and this is the result. As I stated before, I am learning some new software, and this is all part of the learning curve.....not perfect, but colourful at least. It helped brighten a very cool, dreary day, and Spring can happen any time now...the sooner the better. Take care, and stay healthy and happy......
Posted by David c.h. Brown at 01:34 No comments: This image was done purely for the splash of colour it provides. Sometimes I'm in the mood to be hit with an overload of colour, similar to this, so I throw reality to the wind, and go for the gusto. It might even look good as a 40 x 60 inch print to hang someplace that needed a boost of colour. However, my in house art critic hates this stuff, and prefers the purist approach instead. Being house bound does strange to the mind sometimes...and I am making no apologies. It is what it is....Cheers!
Posted by David c.h. Brown at 01:42 No comments: 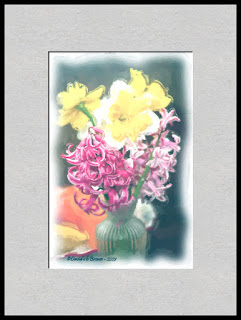 This little image tonight was provided by our neighbour Terri, as she brought a handful of blossoms from her lovely garden, to my wife and me. We had not been out of the house for several days, and I think it was her way of checking up on us. At any rate, they found a place on our kitchen table next to a bowl of oranges and bananas. Of course, I had to grab a quick shot of them, and tonight, I decided to play with them a bit, using my Corel Painter software. It is supposed to resemble a watercolour rendering of the original image, and I guess, for the most part, it does a much better job of it in automatic mode, than if I were to go at it freehand....needless to say, I am no artist. This is about as close to that as I can get. The matte and frame is also courtesy of Corel software. It is not something that I will be doing very often, but it is a little change up, to help stave of the boredom dogs....Cheers!
Posted by David c.h. Brown at 01:19 No comments: 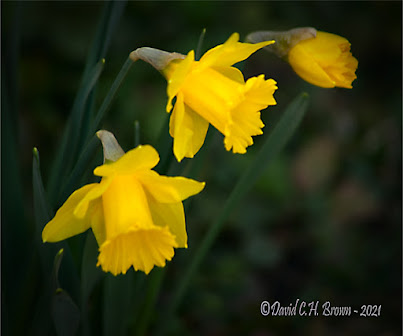 This little image was the first attempt at photo editing with some new Affinity software. It will take a little while to be comfortable with it, but so far, so good. Anyway, I decided that it might be a nice one to wish everyone a very Happy Easter, and to stay safe and healthy. Cheers everyone.....
Posted by David c.h. Brown at 12:54 No comments: 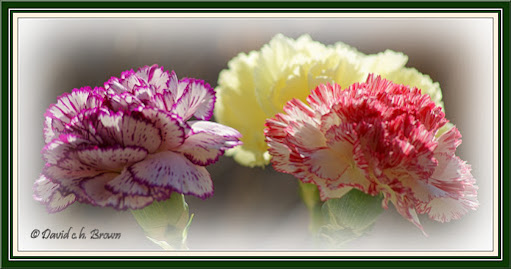 It is a lovely sunny day today, and instead of blowing up the tires on my old bike and going for a ride and enjoying this +17C weather, I somehow got to taking a picture of these 3 carnations that were in a little vase on the table. It is a very simple image, and nothing to get all fired up about. I just took it and placed it on the railing post on our back deck, and shot it in slightly back lighting.....just a cheery little picture to hopefully bring some a little joy during these looooooooong days we all must endure. Cheers!
Posted by David c.h. Brown at 17:38 No comments:

David c.h. Brown
I was born in Deer Lake, on the western coast of Newfoundland in 1943. It was a privilege to grow up in the City of Corner Brook, Bay of Islands, Newfoundland. Moved to Ontario in 1962, and to North Bay in 1973 where we chose to raise our family. I was introduced to photography mainly by Mike de Moree and the late Jack Shepherd while living in North Bay. I am presently retired in Windsor, Ontario, where I can be close to my family again. My photography is for my personal pleasure, and hopefully it will help make my retirement years more meaningful to me and others as well. Hope you enjoy. For a larger view of images, click on the image, and then press F11. 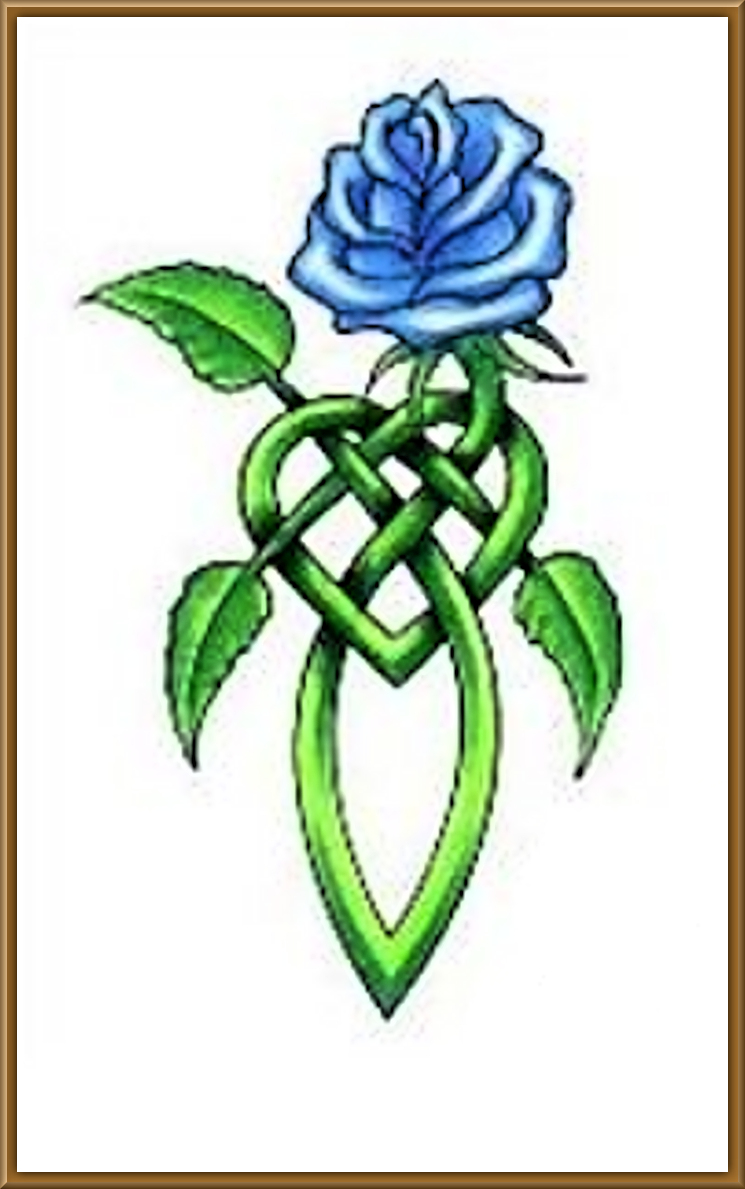